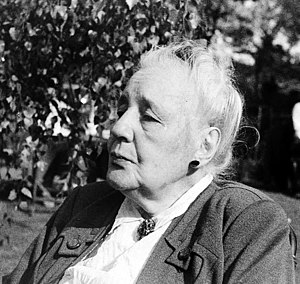 Born in Vienna, she built on the work of Sigmund Freud, particularly in the area of child psychology. Klein is one of the cofounders of object relations theory.

Invited by Ernest Jones, Melanie Klein came to London in 1926, where she worked until her death in 1960.

Klein's theoretical work gradually centered on a highly speculative hypothesis propounded by Freud, which stated that life may be an anomaly, that it is drawn toward an inorganic state, and therefore, in an unspecified sense, contains an instinct to die. In psychological terms Eros, the sustaining and uniting principle of life, is thereby postulated to have a companion force, Thanatos, which seeks to terminate and disintegrate life.

Examining ultra-aggressive fantasies of hate, envy, and greed in very young, very ill children, Melanie Klein put forth the interpretation that the human psyche is in a constant oscillation depending on whether Eros or Thanatos is in the fore. She calls the state of the psyche, when the sustaining principle of life is in domination, the depressive position. The psychological state corresponding to the disintegrating tendency of life she gives the name the paranoid-schizoid position.

Melanie Klein's insistence on regarding aggression as an important force in its own right when analyzing children brought her into conflict with Anna Freud, the other major child psychotherapist working in England at the time. Many controversies arose from this conflict.

Other books on Melanie Klein: